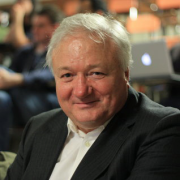 What is the Bragg Lecture?

Sir Lawrence Bragg was Langworthy Professor at the University of Manchester from 1919 to 1937. From 2016, the School of Physics and Astronomy has presente an Annual External Bragg Lecture with an external invited speaker whose work builds on the foundations laid by Sir Lawrence Bragg. The date is chosen close to the anniversary of his birthday. The lecture is aimed at undergraduates.

X-Ray and Microwave Cosmology: Synergy and Competition What can we expect from SRG/eRosita and new ground-based microwave telescopes?

Our Universe is filled by cosmic microwave background radiation (CMB) which is extremely isotropic and has an excellent blackbody spectrum at temperature 2.726 Kelvin, with no departures from the blackbody spectrum detected so far. However, 50 years ago, my Mentor Yakov Zeldovich and I predicted the presence of “shadows” in the angular distribution of the CMB in directions where clouds of very hot electrons (Te~10^6-10^8 K) are present. Today we know that such objects exist as clusters of galaxies containing thousands of galaxies each, a lot of dark matter, and a hot gas filling their huge potential wells. The “shadows” with very peculiar frequency spectrum and signal amplitude corresponding to a few tens or hundreds of microKelvin arise due to Thomson interactions of CMB photons with hot electrons. Today this effect permitted us to discover several thousands of previously unknown clusters of galaxies at relatively high redshifts 0.25 < z < 2. Behind practically every newly discovered rich cluster of galaxies we see the extremely distant galaxies with shape distorted and brightness increased due to gravitational lensing by huge gravitational potential of a cluster connected mainly with the invisible “dark matter”.

There is also a more common way to observe the same hot gas using X-rays. This June, Russia plans to launch the SRG spacecraft with German eRosita X-Ray telescope supplied with grazing incidence optics. This telescope will discover more than 100,000 clusters of galaxies (i.e. all rich clusters of galaxies in the observable Universe) during 4 years of its all-sky survey. At the same time, ground-based millimeter wavelengths telescopes at the South Pole and Atacama desert at 5 km altitude, equipped with tens of thousands of cryogenic bolometers in their focal planes, promise to detect all these clusters due to their “shadows” in the CMB.

The datasets will be highly complimentary because the X-ray emission due to free-free emission of the hot gas is proportional to the square of the electron density and amplitude of shadows depends linearly on the plasma pressure Pe~NeTe. There will thus be a lot of synergy. At the same time there is competition: who will be first to discover the most interesting clusters of galaxies? Ensembles of 10^5 clusters, their distribution in space, mass and redshift will provide a unique data sample for testing cosmological models.

Interaction of CMB photons with free electrons also opens a unique way to measure the peculiar velocity of clusters relative to the unique system of coordinates in which CMB is isotropic. Observers can now measure peculiar velocities and even bulk and turbulent velocities inside clusters of galaxies at any distance from us because both effects (thermal and kinematic) do not depend on the redshift of the object. This will open additional exciting opportunities which I will briefly elude to in my lecture.