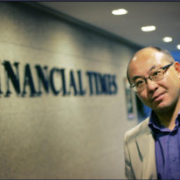 In this talk, Prof Lifen Zhang, journalist, author and broadcaster will explain why, in his view, social media, the national obsession and blessing, presents a dilemma to the government and the state of journalism in China. The country is emerging, unexpectedly, as a giant of social media in the world, rewriting human communication history. The Internet has reconfigured the way its people connect to each other and also how the nation is governed. The entire Chinese rural population has skipped fix-line telephony and operates only via mobile.

Prof Zhang while currently a professor in the School of Journalism at Fudan University, also serves as the Chief Advisor for China Business News (CBN), the largest business media group in China. Previously associate editor of the Financial Times, he served, from 2004-2015, as the founding editor of FTChinese.com, the FT’s award-winning Chinese language business online publication. Before joining the FT, Lifen worked for the BBC for 10 years during which time he held various roles: assistant producer for BBC TV; producer; senior producer; senior trainer in journalism & production; and news & current affairs editor at the BBC World Service. He has received various international media awards including Asia’s SOPA journalism award, the BBC Onassis Bursary, as well as the State Street Award for Outstanding Contributions in Institutional Journalism. He is also a media leader at the World Economic Forum.