Germany and the Approach of War in 1914: (WW1 Centenary Lecture Series) 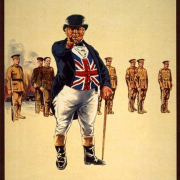 Although a number of recent publications have attempted to lessen Germany’s responsibility for the First World War – the ‘erosion of the German paradigm’ as Samuel Williamson has put it – it remains clear that the Wilhelmine Empire was a central factor in the outbreak of war. Rather than focusing on the well-documented events of the July Crisis, this talk looks at the longer term domestic and foreign policy considerations which led many high-ranking Germans to favour a military solution in the summer of 1914.