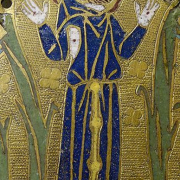 Giovanni Boccaccio’s (1313-1375) corpus boasted a long-lasting and geographically extensive presence in early modern print production. As an author who experimented with both classical and contemporary vernacular literary traditions, wrote across a range of genres, and addressed a broad and eclectic readership, the extent to which his texts were translated, edited, and reproduced is unsurprising. Indeed, by the mid-sixteenth century most of his works had been printed in translation including editions in French, German, Spanish, English, Dutch, Czech, and even Modern Greek. The impressive collection of Boccaccio editions at the Rylands offers an exemplary case study for the author’s universal appeal. By addressing the textual and material evidence of these holdings, I will interrogate some of the ways in which the early modern Boccaccian book-object has been made, re-made, and has travelled through space and time.

Saint Francis of Assisi (d. 1226) is the most famous stigmatic of the late middle ages and was defended by members of his order as the only person to have received such a miracle. However, a number of other holy people were claimed as stigmatics between the thirteenth and the sixteenth century. The Dominicans promoted members of their order as stigmatics such as Walter of Strasbourg (d. before 1260), Margaret of Hungary (d. 1270), and Catherine of Siena (d. 1380). Their experiences of stigmata were distinct from those of Saint Francis. I will explore the debate about the understanding of stigmata within the context of the imitation of Christ and the controversies surrounding the visual representation of stigmatics in the period up to the early seventeenth century.