Off Beat: Jeff Nuttall and the International Underground 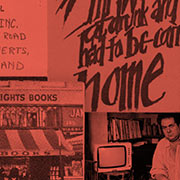 Painter, poet, actor and sculptor, a man once described as "the only all-round genius most of us are likely to meet," Jeff Nuttall was one of the few people in the early 1960s to publish William S. Burroughs' most experimental writing.

He was also a performance artist, a pioneer of 'happenings' and author of nearly 40 books. As a cultural critic, his seminal work, Bomb Culture, was discussed in Parliament. Nuttall was at the centre of the International Underground scene driven by social dissent and the fear of imminent nuclear attack.

Yet, despite being a giant of the counterculture, the Lancastrian-born polymath is little remembered today. That is set to change with our Autumn/Winter exhibition. Off Beat: Jeff Nuttall and the International Underground reveals a network of artists and writers whose work was shared worldwide via the low-fi, self-published magazines of the "mimeograph revolution".

Chief among them was Nuttall's My Own Mag. Burroughs was both a contributor and collaborator and displayed in the exhibition is a rare edition showcasing a Burroughs cut-up text. Other countercultural magazines are featured, to which Nuttall himself contributed, including the one-issue only "newspaper" The Moving Times, and five of Nuttall’s books.

It is Nuttall’s combination of word and image, art and activism – and content that remains provocative and sometimes shocking – that made him a legend in his own time. As we face our own uncertain times, Nuttall's work feels as prescient today as it did five decades ago.

Please note: because of the adult nature of the content in this exhibition, it is not suitable for children.