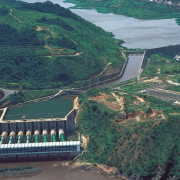 In 1996, the geographer Richard White published a book on the history of human exploitation of the Columbia River in North America. He called it The Organic Machine. He spoke of the Columbia in terms of an energy system, changed by human interventions yet retaining natural or ‘unmade’ qualities. Everywhere today, the organic machines of flowing rivers have been harnessed for human purposes by dams and other engineering structures designed to control and direct their waters. The large-scale engineering of rivers has been a conspicuous feature of the great twentieth century modernist dream of development.

In this lecture I want to argue that behind these projects lies a particular vision of the organic machine, the idea of a perfect river. This river is one that can be fully known and whose future dynamics are predictable; one that can be re-engineered to work differently, that will perform as expected, and that will yield economic benefits whose magnitude and distribution can be determined with a high degree of confidence. This perfect river, a model of the real world, exerts a powerful influence on the imagination of planners, engineers and decision-makers. Yet real rivers often turn out to be far from perfect, and attempting to perfect them leads to all the negative impacts on environments and riverine people that the opponents of dams deplore.

So how should we think about the relation between perfection and complexity in the organic machine of the river? How should we approach attempts to alter the way that machine works?