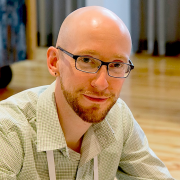 It is now widely accepted that graphene oxide and related 2-dimensional nanomaterials can stabilise emulsions and foams at a fraction of the material cost when compared to the conventional 3D (usually spherical) particles employed for Pickering/Ramsden emulsification (1). Emulsions stabilised by graphene oxide show remarkable stability, and can be tuned by changes in solution conditions, making them interesting candidates for a range of applications.Such emulsions are exquisitely sensitive to the parameters used during their formulation, which affect the interactions between graphene oxide and the oil–water interface: pH, salt, oil type, and the presence of other additives. Their stability to dilution is particularly appealing when compared to molecularly stabilised emulsions.

In most cases, emulsification of oil in water with graphene oxide gives simple oil-in-water emulsions (1). However, for certain oils, carefully engineered solution conditions result in single-step production of multiple emulsions (2), leading readily to multi-compartment capsules through polymerisation of the outer droplet interface. Controlling the outer ‘skin’ of these capsules allows for controlled release of active agents contained within, with potential applications in agriculture and water treatment.

The same colloid chemistry – understanding stability and interactions, can be used to exert subtle control over graphene oxide using light-switchable surfactants (3) or non-covalently bound magnetic particles (4) or magnetic molecules (5). This enhances opportunities for using this material to capture toxins or valuable materials from water at low concentrations, and provides new routes for remediation and refining.

Rico Tabor is an ARC Future Fellow and Senior Lecturer at Monash University. He leads the Soft Materials and Colloids Laboratory within the School of Chemistry. He completed his undergraduate degree at the University of Bristol, UK, and went on to undertake a PhD in the surfactant lab of Prof. Julian Eastoe, graduating in 2009. The topic of his PhD was investigating the kinetics and aggregation of surfactants in non-aqueous solvents, with particular focus on nanoparticle stabilisation. Late in 2009, Rico emigrated to Australia to take up a post-doctoral position at the University of Melbourne, exploring interactions in soft colloidal systems using atomic force microscopy.

In 2012, Rico took up a lectureship in the School of Chemistry at Monash University. His group’s research is focused on several key areas of soft materials and colloidal systems:

Novel surfactants and their properties, including pH and photo-responsive molecules;

Rico has published 75 papers across a range of topics in surface and colloid science, and works extensively with industry on applications of colloidal systems to practical problems.