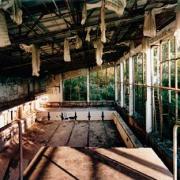 Bringing together recent works by the acclaimed British artists Jane and Louise Wilson, this exhibition features the world premiere of their new film The Toxic Camera alongside Atomgrad (Nature Abhors a Vacuum). Commissioned by Forma to coincide with the 25th anniversary of the 1986 Chernobyl nuclear disaster in the former Soviet Union, Atomgrad is a suite of large-scale photographs, depicting deserted interiors from the now almost entirely abandoned city of Pripyat, situated within the 30km wide exclusion zone around the former nuclear power station. The richly textured images of public spaces include a kindergarten, cinema and a swimming pool, all of which explicitly reveal years of decay and the hurried nature of their abandonment.

The Toxic Camera is a new film reflecting on the disaster, inspired by the film Chernobyl: A Chronicle of Difficult Weeks made by Soviet filmmaker Vladimir Shevchenko in the days immediately following the accident. On processing his film, Shevchenko noticed sections of it were heavily pockmarked and affected by static interference, coinciding with the sound of his Geiger counter measuring radiation, and realised that radiation was effectively ‘visible’ on the film material itself.

The Wilsons’ film explores interconnecting stories from interviews conducted with Chernobyl ‘veterans’ and with Shevchenko’s film crew, 25 years after the incident. The narrative includes the story of the camera that Shevchenko used which became so highly radioactive that it was subsequently buried on the outskirts of Kiev. The film is a reflection on the material nature of film and considers the human impact of the disasters in Chernobyl and the more recent explosion in Fukushima.

Credits: Atomgrad (Nature Abhors a Vacuum), 2010 Jane and Louise Wilson Produced by Forma Commissioned and produced by Forma, in association with John Hansard Gallery, Dundee Contemporary Arts and Whitworth Art Gallery. Supported by Arts Council England. The development of this project is supported by the British Council Ukraine, the Center for Urban History of Central East Europe, Lviv and the Visual Culture Research Center, University of Kiev.