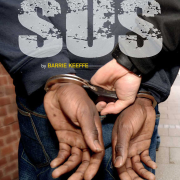 It’s election night, 1979. Two detectives on the graveyard shift in an East London police station exchange bets on which party will win. Delroy is brought in ‘on suspicion’. The interrogation is going to take all night. The country wakes up to a new Conservative government.

Written in the early days of Thatcherism, Sus is a powerful cry against institutional racism. This revival of Keefe’s 1979 classic coincides with the general election of 2010.

First seen at the Young Vic in 2009 SUS is the first co-production between Young Vic and eclipse theatre (The Hounding of David Oluwale, Angel House), a company with a national reputation for producing high quality culturally diverse theatre productions and projects across the country.