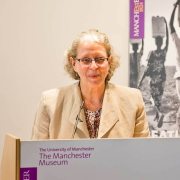 Today’s consumer society exists because of the multitudes of global value chains linking firms of all sizes across countries, cultures, political and trade boundaries. Global value chains change how multi-national corporations interact with their consumers and suppliers and have impacted the working conditions of workers in factories, farms, and stores across the world.

The growth of contemporary retail has been driven by the commercialised production of many goods previously produced unpaid by women within the home. Sourcing is now largely undertaken through global value chains in low- or middle-income economies, using a 'cheap' feminised labour force to produce low-price goods. As women have been drawn into the labour force, households are increasingly dependent on the purchase of food and consumer goods, blurring the boundaries between paid and unpaid work.

Prof Barrientos’ talk focuses on the changing gender patterns of work in a global retail environment associated with the rise of contemporary retail and global sourcing. This has affected the working lives of hundreds of millions of workers in high-, middle- and low-income countries. Her talk examines how gendered patterns of work have changed. Some workers have gained but many endure poor working conditions, and women are concentrated in more precarious work. The talk explores the extent to which global retail opens up new channels to leverage more gender-equitable gains in sourcing countries.

The conditions and mechanisms that lead to alternative outcomes are detailed in this talk. It covers workers in the cocoa – chocolate value chains, up-grading and down-grading in African horticulture, the limits of social compliance in Asian apparel, and strategies to promote more gender-equitable outcomes for workers in some companies within flowers and apparel.

Building on years of detailed empirical research across different industries and in several countries, Barrientos examines how global values chains are reshaping the gender profile of work across many middle- and low-income countries. Gendered patterns of work in these global value chains can both relegate women workers to poorly paid and unrecognised labour or lead to economic empowerment and enhanced worker rights.

Biography: Professor Stephanie Barrientos teaches in the Global Development Institute at The University of Manchester. She was previously a Research Fellow at the Institute of Development Studies, University of Sussex (2000-7). She gained her BA and PhD in Political Economy at the University of Kent. She has researched and published widely on gender, global production, employment, decent work, trade and labour standards, corporate social responsibility, fair trade, and ethical trade. She has undertaken research in Africa, Asia, Latin America and the UK.