'Why Survive? Being Old in the 21st Century: Reflections on the Life and Work of Robert Butler' 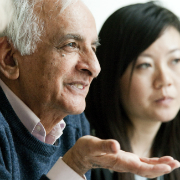 This year marks the 40th anniversary of the publication of Robert Butler's seminal work: Why Survive Being Old in America (Harper & Row, 1975). The book, possibly the most powerful account of ageing ever written, set forward both the state of knowledge about ageing and as well as a political and social manifesto for improving the lives of older people. Some of the concepts developed in the book, notably those associated with what Butler termed ageism, have become a key part of the vocabulary for describing the pressures and constraints facing older people. Butler himself went to become a major figure in the development of gerontology and geriatrics and was the first director of the US National Institute on Ageing. In this lecture, Professor Bengston, who knew Robert Butler over a span of four decades, will talk both about his work and its relevance for understanding and studying the lives of older people today.

Professor Bengston is himself a leading figure in American gerontology. He is a past-President of the Gerontological Society of America; he received a Distinguished Scholar Award from the American Sociological Association's Section on Aging and the Life Course. Professor Bengston has published 16 books and 260 research papers on gerontology, theories of ageing, sociology of ageing and family sociology. Early in his career, Vern began the Longitudinal Study of Generations, a multi-disciplinary investigation of families, ageing and social change. He was also a key figure in the establishment of USC's Andrus Gerontology Center and Davis School of Gerontology.