A Clash of Empires: The Battle of Çaldiran (1514) and 500 Years of Turco-Iranian Relations 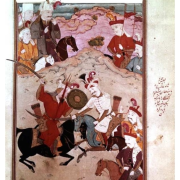 British Institute of Persian Studies (BIPS) & MIHAN present: "A Clash of Empires: The Battle of Çaldiran (1514) and 500 Years of Turco-Iranian Relations"

2014 has been seeing many commemorations of the Centenary of the outbreak of the First World War, a clash of empires which had great implications in the Middle East, not least and especially in Persia, as will be discussed by Dr Oliver Bast in the British Institute of Persian Studies’ Annual Lecture on 27 November 2014 in London (see http://bips.ac.uk/ for details). So many World War I-related commemorative activities have already taken place during this year and many more are to come that our colleagues over at the University of Manchester’s Centre for Interdisciplinary Research in Arts and Languages (CIDRAL) have detected a veritable ‘Commemoration Fever’. Thus in a CIDRAL-lecture on 22 October 2014, Professor Ann Rigney (Chair of Comparative Literature at the University of Utrecht) will ask ‘Centenaries: What Are They Good For?’ (see http://www.alc.manchester.ac.uk/cidral/events/ for details). Rigney notes that in the current commemorative frenzy ‘it sometimes seems as if there was never a centenary before.’ MIHAN, the Manchester Iranian History Academic Network, has the remedy: a Fifth Centenary! Indeed, for Iranians and in fact for everyone interested in Iran’s history, the year 2014 marks the 500th anniversary of an event of monumental importance in Iranian history: the Battle of Çald?ran. On 23 August 1514, the armies of the Ottoman Sultan Selim I (the Grim) decisively defeated the less-well equipped troops of Shah Ismai’il I. The latter had not only founded the Safavid dynasty a decade before this battle but in so doing also, arguably, Iran as we know it today. After the disaster of this battle, however, that very Iran could have been easily ‘wiped off the map’; or could it? It goes without saying that the clash of 1514 is of equal if not higher interest for Turks and those fascinated by Turkey’s history, not least given the recent(ish) turn toward the Middle East within the foreign policy of the Turkish Republic, a phenomenon often (mis-)labelled by Western media as ‘Neo-Ottomanism’. The 1514-battle that so violently inaugurated five eventful centuries of Ottoman/Turkish-Iranian relations is a milestone of World History. Please join (MIHAN) (www.mihan.uk/) and the British Institute of Persian Studies (BIPS) (http://bips.ac.uk/) to mark its 500th anniversary. An expert panel of historians of the Ottoman Empire and of Iran will assess the significance of the event and its legacy.