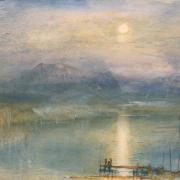 In 1969, standing in front of the Notre Dame Cathedral, Kenneth Clark posed the question: “What is civilisation?” His answer: “I don’t know. I can’t define it. But I think I can recognise it when I see it, and in fact I am looking at it now.”

Since then, Clarke has been criticised for his focus on Western art and male artists, his hatred of Surrealism, Abstraction, and Pop Art and his rejection of Marxism. Yet the breadth of Clarke’s knowledge was immense and he was committed to making art accessible for all.

As part of the BBC Civilisations Festival, join us at the Whitworth to revisit Clark’s famous TV series Civilisation using outstanding examples of objects from the museum’s rich collections. Join Gillian Forrester, Senior Curator of Historic Fine Art, Leanne Green, Assistant Curator of Fine Art and Luke Uglow, Lecturer in Art History, University of Manchester in considering artworks that might have been included in Clark’s show, including prints by Albrecht Dürer, Marcantonio Raimondi and Pieter Bruegel the Elder, watercolours by J.M.W. Turner and Jean François Millet, and those works of the type that he strategically left out.

Together we will debate the contribution made by Clark in his original television series, and ask: “What is Civilisation today?”

This event is part of our Thursday Late series - eclectic late-night openings until 9pm every Thursday, with music, performances, talks and screenings.