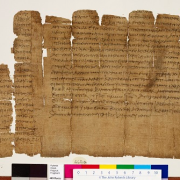 In this paper, Will illustrates some of the different approaches he has taken towards developing a fuller picture of life in the small, rural village of Euhemeria (located in the modern Fayum region of Egypt) in the decades following the Roman annexation of the province in 30 BCE. His approach combines papyrology, the study of ancient texts on papyrus preserved by the Egyptian climate, with social history, the attempt to reconstruct the lives of ancient people not usually attested in literary sources from the ancient world. Euhemeria produced around sixty papyrological texts from the early Roman period, of which half are housed in the John Rylands Library. Will demonstrates, during the seminar, how close examination of these texts has allowed him to draw new conclusions about the people and society of the village, as well as throwing up new research questions, some of which he will present to the audience.