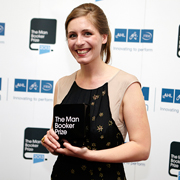 In this event organised by The University of Manchester’s Centre for New Writing, we are delighted to welcome the winner of the 2013 Man Booker Prize Eleanor Catton.

Eleanor Catton was the youngest person, and only the second from New Zealand to win the prize. She has also triumphed with the longest ever Man Booker winning novel (832 pages).

Eleanor Catton was born in 1985 in Canada and raised in New Zealand. She completed an MA in Creative Writing at Victoria University of Wellington in 2007. She was the recipient of the 2008 Glenn Schaeffer Fellowship to study for a year at the prestigious Iowa Writers' Workshop and went on to hold a position as Adjunct Professor of Creative Writing there, teaching Creative Writing and Popular Culture. Her debut novel, The Rehearsal won the Adam Prize in Creative Writing and the 2009 Betty Trask Award, was shortlisted for the Guardian First Book Award and the Dylan Thomas Prize and long listed for the Orange Prize. Catton also won a 2010 New Generation Award. The Luminaries is an extraordinary piece of fiction. It is full of narrative, linguistic and psychological pleasures, with a fiendishly clever and original structuring device. Written in pitch-perfect historical register, richly evoking a mid-19th century world of shipping, banking and goldrush boom and bust, it is also a ghost story, and a gripping mystery.

‘Irresistible, masterful, compelling. The novel that should win the Man Booker’ Daily

‘This is sheer rip-roaring readability. Yes it's big. Yes it's clever. But do yourself a favour and read The Luminaries’ Independent on Sunday

‘The Luminaries is an impressive novel, captivating, intense and full of surprises’ TLS

PLEASE NOTE: THIS EVENT WILL TAKE PLACE AT THE WHITWORTH HALL, UNIVERSITY OF MANCHESTER AND THERE WILL NOT BE A DRINKS RECEPTION AFTERWARDS.