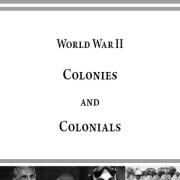 Marika Sherwood is a Hungarian-born historian, researcher, educator and author, based in England since 1965. She has written a substantial number of books on racism, colonialism and Black history, has an extensive catalogue of articles and has contributed to a number of films, radio programmes and conferences. In 1991 with Hakim Adi and other colleagues she founded the Black and Asian Studies Association, to encourage research, to disseminate information and to campaign on education issues.

At the event she will be talking about her latest book, World War II: Colonies and Colonials, which looks at the military, financial and other contributions from the colonies and the political struggles regarding racial discrimination, conscript labour and much else, both in the colonies and in Britain.