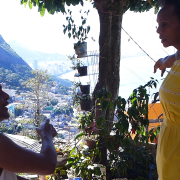 It may be tautological to claim that ethnographic films are a form of storytelling; one that combines concomitance and linearity between images and words to show and tell particular stories. However, drawing on Guto and Graça, a 9-minute film on the impact of slum gentrification in Rio de Janeiro, I argue that ethnographic films carry the elements of storytelling in Arendt and Jackson’s sense. They work as multi-layered forms of ‘action’ (Arendt, 1958) that bridge the personal and the political during the different phases of production, post-production and dissemination. While I emphasize the former two in the paper, I will experiment with the latter by showing the film twice, at the beginning and at the end of my talk, with the intention of putting my reasoning to the test of an academic audience.