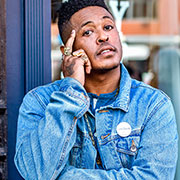 Manchester Literature Festival is thrilled to welcome to Manchester acclaimed American poet Danez Smith. A founding member of the Dark Noise Collective, Danez is an electrifying performer who has twice been a finalist for the Individual World Poetry Slam. Their debut, (insert) boy, was widely praised and went on to win both the Lambda Literary Award and the Kate Tufts Discovery Award.

Danez’s new poetry collection, Don’t Call Us Dead, is an incredible and life-affirming collection of poems that explore race, gender, power, identity, desire, the body and mortality in the face of a HIV positive diagnosis. ‘Dear White America’ and ‘It Won’t Be A Bullet’ rage and burn at a country where every day is too often a funeral and not enough of a miracle whilst the astonishing opening sequence ‘Summer, Somewhere’ imagines an afterlife for black men shot by police; a place where suspicion, violence and grief are forgotten and replaced with the safety, love and longevity they deserved.

The New Yorker suggest ‘Danez Smith’s poems are enriched to the point of volatility, but they pay out, often, in sudden joy’, whilst Roxane Gay praises Don’t Call Us Dead as ‘Poetry as fierce fire… Every poem impressed me, and the level of craft here is impeccable.’

Supporting Danez is poet and performer Hafsah Aneela Bashir. Co-director of the arts collective Outside The Frame Arts, Hafsah is a member of Manchester Muslim Writers and recently wrote and performed a monologue as part of the ‘Memories of Partition’ project at the Royal Exchange. She has a keen interest in writing as a form of resistance and liberty, and her brilliant debut collection will be published by Burning Eye Books in autumn 2018.

Hosted by poet Andrew McMillan and presented in partnership with Manchester Literature Festival.