Building on Things: images of ruin and renewal 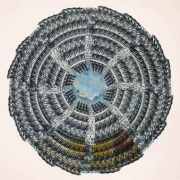 No encounter or engagement with ruins is ever just about the past. Ruins are vehicles for time travel in the imagination.

A ruined building is a reminder to the viewer of the passage of time that has elapsed between its original, pristine, state and its present disintegration. However, in the same moment a viewer cannot help reconstructing a version of the original building in their present imagination. Further, the ruin projects us forward in time; it prefigures a future in which our present will decline and deteriorate, or be overtaken by some unpredictable catastrophe.

The exhibition opens with the ironic modernity of Patrick Caulfield's brilliantly coloured screenprint Ruins and Piranesi's Imaginary Prisons, inspired by a vision of decaying ancient Roman buildings and concerned with incarceration, disorientation, terror and torture. British artists, such as Turner and Girtin, produced a wide variety of responses to the survival or destruction of ancient buildings and the rapid urban change, in progress from the mid- eighteenth century. The contemporary French artist Cyprien Gaillard questions the picturesque tradition embodied by these watercolours with an example of ruin time travel.

Cultural change is pictured as a cyclical process of: construction – zenith – decline – fall – and – renewal in Anne Desmet's Babel Flowers, while Tacita Dean's series of photogravure stills from her film Fernsehturm reflects on the ruination of an ideology while its built physical structures may be reinhabited and reinvigorated. The devastating impact of war is displayed in works by Henry Tonks, Graham Sutherland and Michael Sandle, while Gordon Cheung imagines a future world of bloated international finance and greed, failed hopes and environmental disaster. Related event: