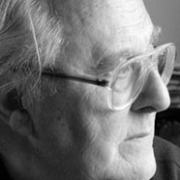 One of the UK’s best writers, Roy Fisher turned 80 in 2010 and the Centre for New Writing is delighted to celebrate that occasion, and the launch of his new collection Standard Midland, (Bloodaxe), in this event co-ordinated by poet Ian Pople. Participants in this event are:

Peter Robinson - was born in Salford, Lancashire, in 1953. He is Professor of English and American Literature at the University of Reading. Part of his doctorate, written in the 1970s, was on Roy Fisher's poetry, and since then he has published a number of essays on and reviews of the poet's work, as well as co-editing News For the Ear: A Homage to Roy Fisher with Robert Sheppard and The Thing About Roy Fisher: Criticial Studies with John Kerrigan, both appearing in 2000. This year, as a tribute to the poet on his 80th birthday, he edited An Unofficial Roy Fisher (Shearsman Books).

Michael Symmons Roberts - was born in 1963 in Preston, Lancashire. His poetry has won the Whitbread Poetry Award and been shortlisted for the Griffin International Poetry Prize, the Forward Prize, and twice for the T.S. Eliot Prize. He has received major awards from the Arts Council and the Society of Authors. He has published two novels, and is Professor of Poetry at Manchester Metropolitan University.

Jon Glover - is a Research Professor in the University of Bolton, School of Arts, Media and Education. He is programme leader for the MA in Creative Writing on which he has taught since 1997. He is a poet and his third book of poems with the Carcanet Press, Magnetic Resonance Imaging, was published in September 2008. Ian McMillan called Magnetic Resonance Imaging his ‘book of the year’ on ‘The Verb’, BBC Radio 3, in December 2008. Jeffrey Wainwright - has published four poetry collections with Carcanet, most recently Clarity or Death! (2008). He is also the author of Poetry the Basics and Acceptable Words: Essays on the Poetry of Geoffrey Hill (MUP 2005). He lives in Manchester.

Fleur Adcock - was born in New Zealand. She spent the war years in England, returning with her family to New Zealand in 1947. She emigrated to Britain in 1963, working as a librarian in London until 1979. She was Northern Arts Literary Fellow in 1979-81, living in Newcastle, becoming a freelance writer after her return to London. She received an OBE in 1996, and the Queen's Gold Medal for Poetry in 2006 for Poems 1960-2000 (Bloodaxe, 2000), which was followed ten years later by Dragon Talk (Bloodaxe, 2010).

Robert Sheppard - is Professor of Poetry and Poetics at Edge Hill University, Ormskirk, and has written on Roy Fisher often, including in his The Poetry of Saying: British Poetry and Its Discontents (Liverpool University Press, 2005) and has a tribute poem to Fisher in An Unoffical Fisher (Shearsman Books, 2010). As a poet he has most recently published Warrant Error (Shearsman Books, 2009) and the epic Complete Twentieth Century Blues (Salt, 2008).