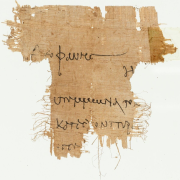 Using as a case study an unpublished letter from an ecclesiastical environment, written in the so-called 'sloping pointed majuscule', this paper will investigate late antique letters penned in literary scripts instead of cursive handwriting, which would otherwise be the norm for Greek documents. Earlier texts, such as those of Theophanes archive, also share this scribal tendency. Questions will include: Who were their authors? What was their educational level and social milieu? Are these letters the work of professional copyists? Finally, do script and language relate to each other?

Biography: Danae Baffa recently completed her PhD in Papyrology (An edition of unpublished papyri of Greek prose from Oxyrhynchus) at UCL. She is interested in Palaeography and scribal attitudes in Late Antiquity. She regularly contributes to the Duke Databank of Documentary Papyri as an online editor and acts an assistant for the Oxyrhynchus papyri project.