Capitalism and the City: Friedrich Engels in the Urban World 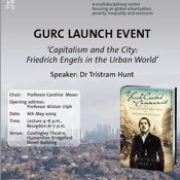 Friedrich Engels’s time in Manchester had a profound influence on his Marxist ideas which now shape the way we see cities around the world - according to two of the country’s leading experts on the subject.

TV Historian Tristram Hunt will reveal how the co-author of the iconic Communist Manifesto - written with Marx himself - discovered that Manchester’s class divisions influenced the way roads were built, neighbourhoods developed and the city was organised.

In a lecture to launch The University of Manchester’s Global Urban Research Centre (GURC) on May 6, Dr Hunt will join leading development theorist Professor Caroline Moser to explore the relevance of Engels’s thinking in the developing and developed world.

Drawing on new research from Professor Moser and others at GURC, Dr Hunt will reveal the importance of the city of Manchester in forming this vision.

His new book: Engels the Frock-Coated Communist is also published this month.

He said: “Friedrich Engels changed the way we see how cities work in Britain and abroad, in the nineteenth century and today. And he did so because of his years in Manchester as a young man in the mid-1840s.

“He was one of the great chroniclers of urban life and described how the streets, private homes and public places of Victorian Manchester were the product of class war.

“Like few before him, he appreciated the city’s spatial dynamics as expressions of social and political power.”

He added: ”Engels thought he had never seen ‘so systematic a shutting out of the working class from the thoroughfares, so tender a concealment of everything which might affront the eye and the nerves of the bourgeois, as in Manchester.’

“This sense of spatial division along class lines was reflected in numerous Victorian cities – and has arguably come alive again in recent years with urban space tightly controlled by security guards, property developers and the police.

”Urban life is still undoubtedly the product of class conflict.”

Professor Moser, who is Director of GURC at The University of Manchester said: “The same class dynamics identified by Engels in Victorian Manchester are at work in the mega-cities of today right across the globe.

“In many developing Latin American cities, for example, security not schools or water is the biggest priority and increasing crime, burglary and gangs - all associated with growing inequality - has again shifted the focus on to class.

“It also explains how a dramatically expanding private security system - protecting the wealthy - has mushroomed in many cities.

“Indeed, class is a huge issue in the third world, but it is the inequalities endured by the excluded and alienated rather than poverty itself which has produced an exaggerated level of fear.”