Stressing so much that defects don't matter. 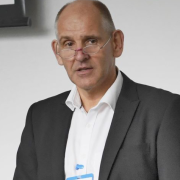 Professor Neil Bourne, Professor of Matter in Extreme Environments, Director of The University of Manchester at Harwell, & Co-director of The Thomas Ashton Institute

Wouldn’t it be marvellous to live in world where we knew that matter had a single strength so that response could be predicted precisely and damage could be avoided? In our daily lives, failures can occur in people, organisations or structures when stresses mount to a point that the weakest link fails and local collapse ensues. However, matter has a limiting strength beyond which varied behaviours at lower compression change to uniform flow in the regime beyond. This threshold also opens a state in which materials transform their electronic states, change conductivity and transparency and emit radiation. That response above this threshold is predictable, allows extreme engineering to precede with less risk of failure than in the defective world in which we live. We shall explore these behaviours and discuss applications for this framework going forward.

You can watch the recording of this talk here: https://apsphysics.zoom.us/rec/share/WC1tTlxOyyDtGJLZfcWB_IS-6Wl_g_A83qLe1KMaCvnwfWiFHdTJhBAvh5wgURvW._h3flyoPgQkPngAN Passcode: !F8$RoW*

Role: Director, The University of Manchester at Harwell