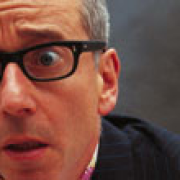 Mr. Hegley was born in North London, was educated in Luton, Bristol and Bradford. His first public performance monies were accrued from busking his songs, initially outside a shoe shop in Hull in the late Seventies. He performed on the streets of London in the early eighties, fronting the Popticians with whom he also recorded two sessions for John Peel. He has since performed his words sung and spoken across the network for BBC radio. He has produced 10 books of verse and prose pieces, two CDs and one mug, but his largest source of income is from stages on his native island.

Please note an age restriction of 14 and over.