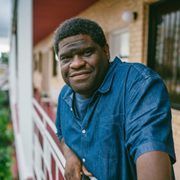 Editor, critic & broadcaster Ellah Wakatama Allfrey OBE presents a brand-new series of in-depth interviews at HOME, in partnership with the University of Manchester, with a line-up of some of our most exciting contemporary writers whose work embodies and has strong resonance with the powerful theme of Hope & Resistance.

Born in Hertfordshire to Barbadian parents, Gary Younge grew up in Stevenage until he was 17 when he went to Kassala, Sudan with Project Trust to teach English in a United Nations Eritrean refugee school. In 1996 he was awarded the Laurence Stern Fellowship, which sends a young British journalist to work at the Washington Post for three months. After several years of reporting from all over Europe, Africa, the US and the Caribbean Gary was appointed The Guardian’s US correspondent in 2003, writing first from New York and then Chicago. In 2015 he returned to London where he became The Guardian’s editor-at-large.

He is the author of five books: Another Day in the Death of America, A Chronicle of Ten Short Lives; The Speech, The Story Behind Martin Luther King’s Dream; Who Are We?, And Should it Matter in the 21st century; Stranger in a Strange Land, Travels in the Disunited States and No Place Like Home, A Black Briton’s Journey Through the Deep South. He has also made several radio and television documentaries on subjects ranging from gay marriage to Brexit, writes a monthly column, Beneath the Radar, for the Nation magazine and is the Alfred Knobler Fellow for The Nation Institute.

Offers: Book for 5 or 6 events in The Complete Works series in 1 transaction and get 25% off