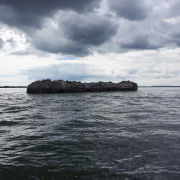 The lecture will use examples of my own work to discuss utopian ideas within current post-studio art practice, including 'Nowhereisland', my ten-year artwork that culminated in a new travelling nation built from an Arctic island that I discovered in 2004. 'Nowhereisland' gathered more than 23,000 citizens during its journey from the High Arctic to the south west coast of the UK. Other works covered will include 'Vigil' for the 2014 Folkestone Triennial and 'Dropper', which was installed at various venues including Occupy, London in 2012. Both installations involved full time occupation of the artworks by the artist and others. Other artists’ projects, that inspire or overlap with my practice, will be considered (including Francis Alys, Andrea Zittel, and Olafur Eliasson) alongside utopian architectural concepts and their relationship to sculptural production