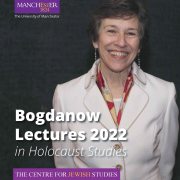 This Masterclass will give students and staff the opportunity to discuss the topic of Refugees and gender studies: new perspectives in Holocaust studies with Prof Marion Kaplan.

Please register with your University of Manchester email.

As part of the annual public Holocaust lecture series was made possible as a result of the generous bequest to the University by Fanni Bogdanow (1927-2013), a former Professor of French and Medieval Studies at Manchester and a child refugee on the Kindertransporte. Previous Bogdanow Lectures were delivered by eminent historians in the field, including Christopher Browning, Tony Kushner, Dina Porat and Oscar winning director Laslo Nemes.