Environmental Impact of the Hungarian ‘red mud’ disaster: Lessons Learnt and Could it Happen Again? 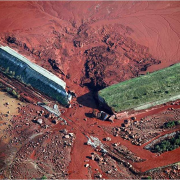 By Dr Zoltán Illés, Hungarian Minister for Environmental Affairs. In October 2010 the sludge reservoir of an alumina production company southwest of Budapest in Hungary burst. The accident released 700,000 cubic metres of alkaline ‘red mud’ waste which flooded towns and villages, contaminated over 1,000 hectares and polluted several rivers. Ten people died and over 130 were injured as a result of one of Europe’s worst environmental disasters of the last 20 years. Dr Zoltán Illés has been the Hungarian environment minister since June 2010 and is therefore in a unique position to discuss what happened, how the red mud contamination and environmental damage was contained and what lessons can be learnt to prevent similar accidents happening elsewhere.