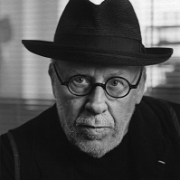 Joseph Kosuth, a pioneer of Conceptual art, is one of the most renowned and influential artists of the 20th century. His language-based works rigorously explore the production of meaning in art and the relationships among words, images and their meanings in the viewer's experience. Alongside his writings and his vision of the artist as a philosopher and moralist they have profoundly affected not only the course of contemporary art since the 1960s but also the discourses of art theory and cultural studies. His own work has been influenced by, among others, the philosophy of Ludwig Wittgenstein, Sigmund Freud's psychoanalysis, his own studies in anthropology and his interest in modern literature. Throughout his long career Kosuth has drawn on such resources in his gallery works, site-specific installations and public commissions to present the viewer with questions that often extend beyond the meaning of art and make his audience contemplate issues of poverty, racism, loneliness, isolation, and personal identity.

Book your place for Joseph Kosuth by following the link below: https://www.eventbrite.co.uk/e/tuesday-talks-joseph-kosuth-tickets-31873512534?aff=es2