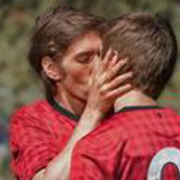 Kyle is comfortable with his life as a male escort until the day he is hired by a premiership footballer, and finds himself falling in love.

But can Kyle maintain a relationship with a closeted footballer in a country where not one pro player is out? Can he go on pretending that the homophobia endemic in the game is nothing to do with him? Does he know what a relationship means, when, for him, sex has only ever been a transaction? Can he ever tell his friends – and his family – the truth?

Hailed by The Independent as ‘a singularly brave and extraordinary piece of theatre’, Away From Home has been playing to sell-out audiences since it opened the 24:7 Festival in 2013, and where it scooped two awards: the Equity Vicky Allan Memorial Award for Best Show of the Festival and Best Actor for Rob Ward’s tour-de-force portrayal of male escort, Kyle. Away From Home has also since garnered other prestigious industry awards including the Manchester Theatre Awards for Best Fringe Performance and Best New Play, and Rob Ward has received an Off West End Award nomination for Best Actor.

An edgy, moving and subversive one man show laced with sharp humour, Away From Home goes in for a hard tackle on football’s last taboo.

We are delighted to welcome back Rob Ward, who graduated from The University of Manchester’s Drama department in 2008.

Please note: United Utilities are carrying out essential repair works on Oxford Road (near the Royal Infirmary). Please allow additional time to get to events at the Martin Harris Centre