Religion and Doctor Who Day 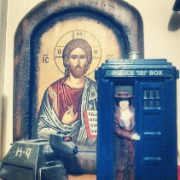 Join scholars from the UK, US and Scandinavia as we celebrate the 50th anniversary of Doctor Who with a wide-ranging examination of the way it has dealt with (and been used by) religion and religious organisations. Over the show’s long history on television religion and religious themes have consistently been a subject of interest. From early depictions of Buddhism and paganism to recent years in which the show has been accused of being both messianic and overtly Atheistic, religion has always played an important role on Doctor Who. Topics discussed will range from the show's treatment of demons to its portrayal of Buddhism and its use a tool in teaching Religious Studies in school and universities. Caroline Symcox, writer of Doctor Who audios "The Council of Nicaea" and "Season of Fear" as well as a Church of England minister, will be offering our keynote speech. This promises to be an event that will be of interest to both Doctor Who fans and to all those interested in the intersection of religion and popular culture.

This event is free, but is NOW FULLY BOOKED. Email drwhoreligion@gmail.com if interested in being added to the Waiting List. Please note, that due to a long Waiting List, additional places are unlikely to open up.