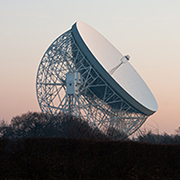 The Square Kilometre Array (SKA) project is an international effort to build the world’s largest radio telescope with eventually over one square kilometre (one million square metres) of collecting area spread out over thousands of kilometres in Africa and Australia. It began in 1993 as a “grassroots” endeavour in the radio astronomy community pooling ideas and resources from across the world, and is now in the final stages of design with construction of the first phase due to start in 2020 at a cost of €650 million. The full SKA is likely to cost several billion €.

Coordination of the effort has evolved from a Working Group in 1993 to a UK Company Limited by Guarantee currently, but this will transition to an Intergovernmental Organisation in 2020 with Headquarters at The University of Manchester’s Jodrell Bank Observatory in Cheshire. It is one of the largest scientific endeavours in history with 10 member countries in the SKA Organisation and around 100 organisations across 20 countries participating in the design and development of the SKA.

In this talk, Richard will cover the following topics:

Biography: Richard Schilizzi obtained his Ph.D. in Radio Astronomy from the University of Sydney in 1973. After a post-doctoral fellowship at the California Institute of Technology, he joined the Netherlands Foundation for Research in Astronomy in 1976 and played a leading role in building the European VLBI Network (EVN) over the following decades. From 1991 to 2008, he held a concurrent position as Professor in Radio Astronomy at Leiden University.