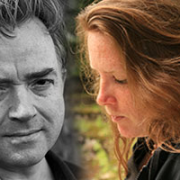 Maureen N. McLane was educated at Harvard, Oxford, and the University of Chicago. She is the author of World Enough: poems (Farrar, Straus, 2010) and Same Life: poems (FSG, 2008) as well as two books of literary criticism, Balladeering, Minstrelsy, and the Making of British Romantic Poetry (Cambridge UP, 2008) and Romanticism and the Human Sciences (CUP, 2000). She also co-edited The Cambridge Companion to British Romantic Poetry (2008).

Her recent book, My Poets—an experimental hybrid of memoir and criticism—was a Finalist for the 2012 National Book Critics Circle Award in Autobiography. Her third book of poems, This Blue, is forthcoming from FSG in 2014. Currently an associate professor of English at NYU, she has taught at Harvard, the University of Chicago, MIT, and the East Harlem Poetry Project. Her research and teaching focus on British literature and culture, 1750-1830, and more broadly on the intersection of poetry, "literature," and modernity.

Glyn Maxwell is an established poet and dramatist. He lives in London and is the Poetry Editor of The New Republic and Professor of Writing at New York University and Essex University. He also reviews for the Times Literary Supplement and London Review of Books. A Fellow of the Royal Society of Literature and the Welsh Academy.

Maxwell has won several awards for his poetry, including the E.M. Forster Prize from the American Academy of Arts and Letters (1997), and the Geoffrey Faber Memorial Prize for The Nerve (2004).

In addition to poetry, Maxwell has also written extensively for theatre, opera, screen and radio.