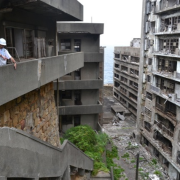 In September 2013, the Japanese government announced plans to nominate the Modern Industrial Heritage Sites of Kyushu and Yamaguchi for UNESCO World Heritage status in 2015. One of the key locations in this grouping of proposed heritage sites is an island called Hashima (also known as Gunkanjima, or Battleship Island), off the coast of Nagasaki. Now a prominent haikyo (ruin) destination and most famous internationally as the setting for the villain's lair in 2012's Bond film Skyfall, Hashima was populated between the 1880s and 1970s as the entrance to an undersea coal mine. The island also housed a large number of forced labourers of Korean and Chinese descent in the 1930s and 1940s, was exposed to the fallout of the Nagasaki atomic bomb and was central to the re-emergence of postwar Japanese industry. Through this one site can be traced the many contestations over East Asian modernity.??In this paper, which emerges from an Arts and Humanities Research Council Care for the Future exploratory grant which funded a period of archival and fieldwork in Nagasaki in 2013, I explore Hashima's place in contemporary contestations over heritage, history and memory in East Asia. I will focus specifically on the different understandings of Hashima's importance as an historical/heritage site, between those who see it as emblematic of the emergence of a modern, industrial Japan and those who see it as complicit in a specifically imperial modernity. This distinction is most sharply drawn through competing memories of those who lived on the island during the pre-war period of forced labour, particularly Korean forced labourers, and those who lived on it in the postwar, primarily the children of miners. These competing memories have appeared in a range of textual forms – multiple autobiographies, photography books, documentary films, guided tours and published collections. In this paper, I will examine the ways in which contemporary relations to Japan’s imperial and industrial past are constructed and contested through these competing memory texts.