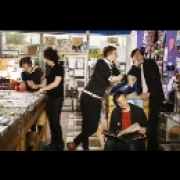 English and German band Art Brut formed in 2003 and at the time were described by Blender magazine as the best-unsigned band in the UK. After self releasing a couple of EP’s the band were approached by Rough Trade who offered them a deal to release the hit single ‘Formed A Band’. This eventually led on to the release of their debut full-length album ‘Bang Bang Rock & Roll’ in May 2005. The album was extremely well received by both critics and fans alike and quickly resulted in the band garnering a very devoted fan base...