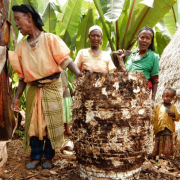 ‘’ A Tree for Living: Enset (False Banana) Cultivation In The Southern Highlands Of Ethiopia”

Enset (ensete ventricosum) is a widely cultivated staple crop across the southern highlands of Ethiopia. It has received some attention from agro-scientists due to its resilience to fluctuating rainfall patterns and due to the storability of its food products. This has led some to argue that enset could play a significant role in contributing to food security in times of scarcity, resulting in Brandt et al.’s 1997 designation of enset as ‘the tree against hunger’. In this paper, we wish to explore enset beyond this characterization which seems to situate it within a language of desperation and scarcity that evokes an image of African livelihoods as ever precarious. Instead, we will argue that the significance of enset in the Gamo highlands is as much aesthetic as it is nutritional, involving relations between people and their animals and between plants and the land.