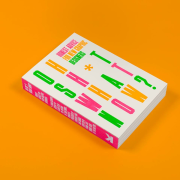 This event, for the student, graduate, and young creative, will revolve around Manchester-based designer Craig Oldham’s latest project, Oh Sh*t… What Now? After working and teaching, mentoring and developing young talent for the past decade, Oldham has collated his experiences and advice on entering the creative industry and what to do when you get there.

Oh Sh*t… What Now? attempts to make a genuine and honest attempt at bridging the gap into the creative industry. And though many might think this was an already well discussed topic, the reality is that the problem is almost never fully addressed in a meaningful, insightful, human manner. The majority of advice available to young and aspiring creatives is a sort-of feedback loop of inane maxims and idle advice, constantly spinning the same strained clichés.

Craig's aim is to try and remedy this. In his honest and direct (Yorkshire) manner.

Craig Oldham is a UK-based designer, educator and writer. He has produced design work for film, TV, retail, publishing, sports and entertainment. His work has been recognised nationally and internationally by D&AD, the Creative Review Annual, Art Directors Club, New York Festivals, Design Week, Type Directors Club, Benchmark Awards, Big Chip Awards, Fresh, and The Drum Awards to name just a few. Craig Oldham has also been named by his peers in the creative industry as one of the most influential designers working in the UK.