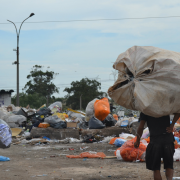 This paper explores the ways in which waste can be considered an urban commons. Drawing on contemporary ethnography and oral histories gathered from waste-pickers (known as clasificadores) in Montevideo, this paper tells the story of Uruguay’s largest landfill, Felipe Cardoso, and the community that has grown around it. Founded as an attempt to landfill clay quarries with waste, the waged-labour of the local brick industry was eventually replaced with a new labour regime based on the unwaged extraction of value from urban discards. ‘Hygienic enclosure’ soon followed and involved the violent state repression of clasificadores both during and after Uruguay’s military dictatorship. I argue that in Montevideo and other developing cities, waste has functioned as an urban commons for the dispossessed. Rather than defining commons as devoid of exchange value and commodification, the paper makes a comparison to the historic English commons, as spaces where customary access is claimed by the poor, subsistence materials are extracted, refuge from wage labour is sought, lines between work and play are blurred, and enclosure is resisted.