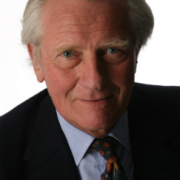 Lord Heseltine was a Member of Parliament in Britain from 1966 to 2001. He was a Cabinet Minister in various departments between 1979 and 1986 and between 1990 and 1997. He was Deputy Prime Minister from 1995 to 1997. He is founder and Chairman of the Haymarket Group, one of the largest privately owned media companies in the UK.

Lord Heseltine has recently been appointed by the government to support negotiations for Local Growth Deals with Local Enterprise Partnerships. He is also chair of the Independent Advisory Panel for the Regional Growth Fund providing advice to Ministers on the quality of bids. In October 2012 he published No Stone Unturned in Pursuit of Growth, an independent review into how the public and private sectors in the UK work together to create wealth. Further to this publication he was invited by the Prime Minister to head up a project in Birmingham to pilot his proposals.

He has written books on Europe and his political autobiography, Life in the Jungle and has begun writing a book on urban regeneration, Building Blocks. Lord Heseltine is an enthusiastic gardener and has created an arboretum for over 3000 different trees and shrubs.

Venue: To be confirmed, Manchester