Rolling back the Years: Peter of Poitiers' Compendium historiae in genealogia Christi at the Rylands 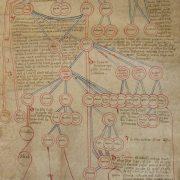 Peter of Poitiers' Compendium historiae in genealogia Christi, a genealogy of the history of Christ composed in the late twelfth century, is an example of a diagrammatic chronicle depicting the ancestral predecessors of Christ, interspersed with schematic illustrations or pictures of key events from the Old and New Testaments. Often copied on parchment rolls, the work was intended to be an accessible resource for 'poor clerics' and preachers. It became very popular, existing in variant versions in over a hundred medieval manuscripts. In this session I will discuss the content and provenance of the two copies of the text present in the collection of the John Rylands Library, placing them within a broader medieval tradition of the use of visual techniques for the representation and recollection of information. I will also illustrate how these manuscripts acted as a locus for the addition of other elements extraneous to the text – such as extra diagrams and short mnemonic verses – additions that reinforced the functionality of the manuscripts as repositories of theological learning.

Biography: Irene O'Daly is a Research Associate in the John Rylands Research Institute. She is a specialist in intellectual history of the central Middle Ages, with particular interests in the history of political thought, the medieval reception of classical texts, and the history of the book