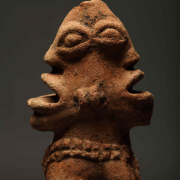 This exhibition at Manchester Museum is the first ever officially approved showing of clay figurines made by a previously little understood people in Koma Land in Ghana in West Africa. The figurines, often fragmentary and depicting stylised two-headed creatures, bird figures, and animals, are thought to represent the ancestors. It is possible that some of the figurines had liquid offerings poured into channels in the figurines, and that some might have been linked with healing and medicine. They were discovered during archaeological fieldwork directed by Prof. Ben Kankpeyeng and involving colleagues such as Prof. Tim Insoll (University of Manchester) working with the Ghana Museums and Monuments Board (GMMB).