Jabs for the Nation: Public Health and the Politics of Mass Immunization in Twentieth-Century China 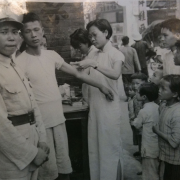 The Second World War made vaccination a cornerstone of public health in China. When Japan invaded eastern China in 1937, the Nationalist government moved its wartime capital to Chongqing, in Sichuan. Physicians and biomedical researchers fled with the Nationalists to China’s southwest borderlands, and many found refuge in Kunming, capital of Yunnan province. There, a biomedical community emerged whose members sought to control epidemics by developing vaccines. Their work enfolded Yunnan and most of western China into a global medical supply network that reached as far as Buenos Aires, Bucharest, and Cairo. This talk suggests that the gathering of biomedical professionals in China’s wartime southwest gave vaccination new meaning as a necessary practice of public health in twentieth-century China.

Role: Lecturer in Global Studies of Science, Technology and Medicine

Organisation: The University of Cambridge