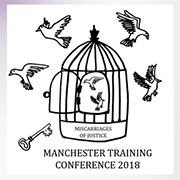 Organised by the School of Law at The University of Manchester, sponsored by Clyde & Co. and LexisNexis.

The 2018 National Training Conference for students in pro bono innocence projects, Miscarriages of Justice Review Centres, and independent case investigators will take place at the University of Manchester on Friday 16 and Saturday 17 February. The students and other investigators give their own time to help with cases of people who claim to be innocent of crimes of which they have been convicted, and who cannot afford to pay lawyers to review their cases. This Conference gives them unique opportunities to hear and meet some of the UK’s leading experts who can help them find out what might have gone wrong in police investigations and prosecutions, and what evidence can be found to support claims of innocence.

We are delighted to have a major contribution from the Criminal Cases Review Commission, an independent body which has the powers to obtain the fresh evidence needed to overturn wrongful convictions, and to refer cases to the Court of Appeal. The CCRC will explain in detail how it carries out its work and lead workshops for participants.

Professor Allan Jamieson, Director of the Forensic Institute in Scotland. Allan is often called to give expert evidence about DNA in the UK and the USA. His evidence was of key importance in the Omagh bombing trial.

Andy Townsend of Footprint Investigations, leading experts on the analysis of phone call data which pinpoints where users are located.

Eric Allison, prisons correspondent of the Guardian who writes on miscarriage of justice cases.

Neil Smith, perhaps the UK’s foremost expert on using the internet to trace people and find information about them.

We will debate and explore the problem of joint enterprise prosecutions, in which innocent people are convicted just because they were in the wrong place at the wrong time, with:

Felicity Gerry QC, who contributed to rectifying the highly controversial law on joint criminal enterprise in the UK Supreme Court case of Jogee. She continues to work on joint enterprise cases and campaign for changes in the law on accessory liability. Felicity will speak via a video link from Australia;

Dwaine George who was himself wrongly convicted in a joint enterprise murder case. His conviction was overturned with the help of Cardiff Innocence Project. He now studies law at Manchester Metropolitan University.

The chaotic state of the disclosure system, responsible for many wrongful convictions because evidence gathered by the police which would help suspects is not passed on to them, will be explored through recent high profile cases, including those of Defence barrister Julia Smart from Furnival Chambers will be present to explain what happened when Liam Allan nearly went to prison for rape that he did not commit and was saved from this fate when undisclosed evidence was found.

Danny Kay, whose rape conviction was recently overturned thanks to the work of barrister Philip Rule who discovered important undisclosed material.

Philip Rule was called to the bar in 2001 and is a barrister at No 5 Chambers. Philip is renowned for his work in public law, civil liberties and human rights and was named Legal Aid Barrister of the year in 2017. He was recently involved in Danny Kay’s case discovering important evidence that overturned his conviction.

Mark Newby, solicitor advocate, possibly the UK's foremost criminal appeal lawyer and a long term active supporter of innocence projects MJRCs, will talk about his recent successes and the technicalities of putting together an appeal case. Andrew Green, is the Director of the Miscarriages of Justice Review Centre at the University of Sheffield. Andrew also runs INNOCENT and has a long history of working with the families and victims of Miscarriages of Justice.

Hannah Quirk, has worked at the University of Manchester since 2005. Her research interests in are mainly in criminal justice and criminal evidence. Hannah worked as Senior Researcher at the Legal Services Research Centre (the research unit of the Legal Services Commission), and as a Case Review Manager at the Criminal Cases Review Commission, investigating claims of wrongful conviction and sentence. Hannah also spent six months on a research sabbatical at the Innocence Project New Orleans. Finally, students, experts, leading lawyers and MPs will come together to discuss how to take forward the campaign to eradicate the scourge of miscarriage of justice.

Mark George QC, head of Garden Court North Chambers, who represented families at the Hillsborough, who will help students, as he has for many years, to understand cases make progress with them.

Brigid Baillie, is a defence advocate at Garden Court North Chambers, experienced in the most serious types of criminal cases and appeals including murder, serious sexual offences (such as paedophile rings and historical sex allegations), drug importation and terrorism. Brigid has a particular interest in vulnerable defendants and those with mental health conditions and is skilled at dealing sensitively with demanding clients in those circumstances.

Michael O’ Brien, spent eleven years in prison for a crime he didn't commit - the so-called Cardiff Newsagent Murder. Since having his conviction quashed in December 1999, Michael has worked tirelessly to ensure that those falsely convicted of crimes are exonerated.

Sarah McGill, headed the Cardiff Innocence Project student team responsible for the 2010 casework that led to Dwaine George’s conviction being quashed R v George 2014 EWCA Crim 2507. Sarah joined 15 Winkley Square Chambers in 2016 having been Called to the Bar as a transferring duty qualified Solicitor-Advocate. She routinely appears in serious cases covering the criminal and regulatory spectrum, including multi-handed prosecutions and those involving complicated expert evidence.

Danielle Manson is a barrister at 25 Bedford Row and was part of the Innocence Project at The University of Sheffield. She has been a clerk at Doughty St Chambers and worked at Justice.

Nazir Afsal was the Chief Crown Prosecutor of the Crown Prosecution Service (CPS) for North West England from 2011 to 2015. He was the first Muslim to be appointed to such a position and was Britain's most senior Muslim lawyer within the CPS of Manchester. . Nazir was also the prosecutor who reopened the sex trafficking gang case in Rochdale which saw nine men jailed in 2012. He is Honorary Lecturer in law.

Dr Dennis Eady, works as Case Consultant to the Innocence Project at Cardiff University Law School and has been an active campaigner on miscarriage of justice issues for 20 years with South Wales against Wrongful Conviction (formerly South Wales Liberty). He has many years of experience on the topic of miscarriages of justice including the appeal process, particularly the CCRC and applications to them.

Henry Thompson, is the father of James Thompson. Battered, bloodied and concussed James ended up in prison. He is now serving a life sentence for murder, a crime he did not commit. He was a victim of assault. Students at the University of Manchester are now working with the family to get this case back to the Court of Appeal.

Finally students, experts, leading lawyers and MPs will come together to discuss how to take forward the campaign to eradicate the scourge of miscarriage of justice.

Book tickets for the conference via Eventbrite: