Film Screening - The Heroes of Our Times: Corona, Amphan and Women 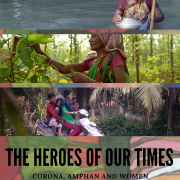 In 2020, Kolkata and the state of West Bengal faced a double jeopardy. On one hand the Covid-19 pandemic and a nation-wide lock down caused widespread unemployment and hunger. On the other, Amphan, the worst recorded cyclone in over 200 years hit the city and parts of the state. But through it all, the women fought on. The new crisis only added to the never relenting problem of gender inequality and patriarchal injustice. This film is a tribute to these women, the true heroes of our times, in fact, of all times.

You can visit the film's website here to learn more about the background and project: https://www.heroesofourtimesthefilm.com/

To register for this event please sign up: https://zoom.us/meeting/register/tJMqfuuvrDooE9I0t5_aOsMmv7bN4EyFjoJp

The film screening will be followed by a Q & A session, chaired by Prof. Khalid Nadvi, Managing Director of GDI, and with the following people:

Dr. Rangan Chakravarty is an independent director producer who has been working out of Kolkata and Mumbai. He is also involved in voluntary work with particular focus on gender issues. He has directed a number of documentaries on various social issues, including the sex workers’ movement in Kolkata. He has travelled to rural belts across West Bengal to conduct workshops on gender and development with adolescent girls and boys. He is a founding member of Ebong Alap, a voluntary organization that runs regular digital campaigns as well as movements at the grassroots level to support women’s rights. Rangan had worked in both corporate advertising and the development sector and has a D.Phil. in Media Studies from Sussex and an MA in Media Studies from New School for Social Research, NY NY.

Self Help Group Promotional Forum (SHGPF) is a statewide network in West Bengal, India. It works on Self Help Group Movement towards sustainable development through empowerment of rural and urban women, especially from deprived, backward and marginalized sections of the society. As a part of this objective, Forum is engaged in documentation of the key issues and challenges faced by women and their organizations that help in understanding and addressing those appropriately.

A professor of Development Economics and Environment, Bina Agarwal has written extensively on agrarian change, land and property rights, environmental governance, and poverty and inequality, especially from a gender and political economy perspective. Her publications include the award-winning book, A Field of One’s Own: Gender and Land Rights in South Asia (CUP, 1994), Gender and Green Governance (OUP, 2010) and Gender Challenges (OUP, 2016), a three volume compendium of her selected papers. Her work on gender inequality in land and on environmental governance, has had global impact. Among her awards are the Leontief Prize 2010; Louis Malassis Scientific Prize 2017; and the International Balzan Prize, 2017. She is currently researching group farming in Asia and Europe.