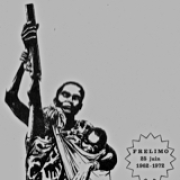 Abstract: Based on archival fieldwork conducted in Maputo in summer 2014, this paper explores the rhetorical use of prostitution in official Mozambican independence discourses. In Mozambique's post-1975 battle to construct a viable socialist nation in the face of increasing external destabilisation efforts, women sex workers came to embody the twin enemies of imperialism and capitalism for ruling party FRELIMO. Grandiose denouncements of their activities filled column inches and echoed around public rallies, with the women in question cast as both stooges and victims of neocolonial endeavour.

While the socioeconomic status of women sex workers in the anticolonial context has been given prominence in feminist histories of Mozambique, the role of prostitution as a rhetorical and discursive touchstone has remained all but absent from scholarly analyses. With this paper, I aim to bring a new perspective on Mozambican sexual politics to light by recentring sex work as the linchpin of gendered discourses during and after the country's anticolonial struggle