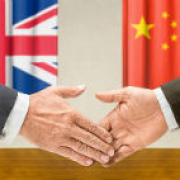 The UK presents itself to China as "best partner", in a way that recalls, somewhat unfortunately, the 'most favoured nation' terminology of the nineteenth century. Whilst some voices in Britain called for imperial annexation in China to follow the same path as India, others were happy to let ‘free trade’ secure Britain’s status as the leading external power in the nineteenth century.

This talk will consider the often difficult relationship between China and the UK over the last three centuries. Do we need to understand the past in order to find harmony with Chinese policy makers? The UK, as a key nation in the coalition known as 'the West', has been a source of inspiration for some Chinese intellectuals but the 'West' was also seen in China as a threat to Chinese national identity. For many in the UK, China was both a mystery and a magnet.