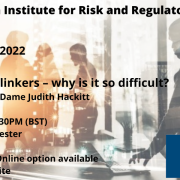 Before chairing the Health and Safety Executive from 2007-2016, Dame Judith spent more than 2 decades working in the Chemical industry at a time when the industry had to learn some hard lessons. Tragedies like Flixbrough, Bhopal and Piper Alpha forced the industry to recognise the importance of building and maintaining public trust and confidence as part of its “licence to operate”. Legislation of major hazards industries played an important part in catalysing the culture change but the industry itself had to change its approach and its culture of “we know best” to one of greater humility and listening to the concerns of it stakeholders.

In this lecture, Dame Judith will reflect on that journey in one sector and draw parallels with the journey which now faces the built environment sector as it too faces new and tougher regulation in the wake of the Grenfell Tower tragedy in 2017. In particular the lecture will look at what gets in the way of cross sector learning and how we might help Construction industry players to make faster progress by opening up to learning lessons and ways of tackling the issues from other sectors.

Following the tragic fire which occurred at Grenfell Tower in London in June 2017, Dame Judith conducted an independent review into Building Regulations and Fire Safety related to high rise buildings for the Government. She began her review in July 2017 and plans to implement her recommendations in full were announced in the Queen’s speech in October 2019. She now works as an adviser to Government chairing the Industry Safety Steering Group holding industry to account to deliver the culture change needed and the Transition Board which is overseeing the setting up of the new Building Safety Regulator. She speaks and writes regularly on the need for industry to step up to its responsibilities for safety and quality.