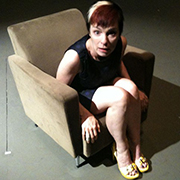 Holly Hughes is an internationally acclaimed lesbian performer whose work has been challenging normative ideas about gender and sexuality for more than three decades. Her work combines poetic imagery and political satire to explore ideas around sexuality, body images, and the female mind.

Hughes was among the first students to attend The New York Feminist Art Institute and a founding member of the Women’s One World Café, also known as the WOW Café, a New York City arts cooperative formed by an international group of women artists. Her performances, including her well known work Clit Notes (1996) have been widely anthologised and serve as foundational material for queer and feminist performance studies. This Performance Lecture, followed by a Q&A, will explore ideas about (hetero)sexual and gendered norms and normativities in addressing this year’s Sexuality Summer School theme, “Why Be Normal?”.

This is one of a series of public events that accompany the Sexuality Summer School, a five-day event for postgraduates, organised by the Centre for the Study of Sexuality and Culture (CSSC) at the University of Manchester since 2008. The Sexuality Summer School brings postgraduates, researchers and international scholars together with artists and filmmakers to facilitate dialogue and discussions that speak to contemporary debates in queer and feminist sexuality studies, with a particular emphasis on the interdisciplinary study of culture. This year, the Sexuality Summer School is funded by The University of Manchester School of Arts, Languages and Cultures, artsmethods@manchester, the North West Consortium Doctoral Training Partnership, the Women's Media Studies Network and Screen. Our partners include Contact, HOME, Manchester Pride, the People's History Museum and the Macmillan LGBT Cancer Support Alliance.

This performance is FREE but booking is recommended: http://ow.ly/WDFl30aPJw7