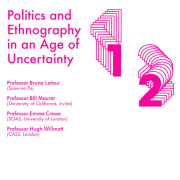 The Annual Ethnography Symposium is a leading international forum for debate and dialogue on the theory, practice, and form of ethnographic work. It was established in 2005 at the University of Liverpool as a multi- and inter-disciplinary platform for researchers using ethnographic methods in the social and management sciences In this time it has established an international reputation for attracting the best keynotes and papers from across the world, covering disciplines as diverse as anthropology, business and management, criminology, history, health-care, philosophy, psychology, socio-legal studies, social care, and sociology. It is unique in its commitment to cross-disciplinary dialogue and its reputation also lies in providing friendly, supportive, yet rigorous critique on papers, integrating and supporting doctoral students, and opening up a wider network of cross-disciplinary scholars to those employing ethnographic methods.

In 2017 the ethnography symposium takes as its theme the question of politics and ethnography in “an age of uncertainty”. In bringing the symposium to the University of Manchester we hope to take inspiration from the first industrialised city and all the tensions and contradictions that have made politics so lively in this city. From the Peterloo massacre to the mass trespass, the suffrage movement and the founding of the Trade Union Congress, Manchester has been a hotbed of protest, resistance, and revolution. We might say politics gets made first - or at least reinvented - in Manchester! The site where the atom was first made ‘nuclear’, and where the 1980s acid house rave culture forced us to re-think the boundaries of politics as it expanded our imagination about possible new ways of being, the energies in Manchester are never very far from politics. Feeding off some of these energies is the University of Manchester. Founded in 1824 as the Mechanics Institute, it became England’s first civic university and since then has changed lives around the world; it was here that Rutherford split the atom and Chadwick discovered the neutron, where Turing built the first self-contained computer, and where graphene was discovered. The University also has a proud heritage of cross-disciplinary ethnographic research, following the founding of the Manchester School Social Anthropology by Max Gluckman in 1947.

For the first time the conference is hosting a series of specialist streams that address the theme of politics from a variety of perspectives and disciplines.