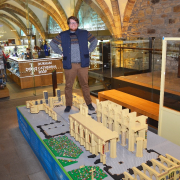 Cathedral Within a Cathedral : Modelling, Knowing and Narrating with LEGO

In July 2013, Durham Cathedral began the Durham Cathedral LEGO Build, a project aimed at raising £350,000 for maintenance to the eleventh-century Anglo-Norman cathedral. Appearing regularly in local media, the chance to partake in the building of a scale model of one of the UK’s most recognisable buildings in LEGO tapped into a vain of enthusiasm few had expected. Within Durham Cathedral visitors paid £1 per LEGO brick and then place their brick at the appropriate place within the model, which continued to grow as increasing numbers of people participated in the build. This seminar will discuss three significant areas of the LEGO Cathedral, beginning with the dynamic relationships formed between the LEGO Cathedral and Durham Cathedral itself as visitors explore the model. Visitors discuss how the building and model relate, before re-entering the cathedral and exploring it through a new perspective of having ‘built’ it in LEGO. Second, the ways in which the model acts as an instigator and repository for passersby who demonstrate their knowledge of Durham Cathedral, sharing stories both of it and of LEGO. Third, the LEGO Cathedral makers – the volunteers who supervise the building of the model – focusing on how a strict adherence to the model’s instructions for assembly slowly evolved into a self-controlled improvisation, particularly when the instructions fail and the ‘correct’ pieces are unavailable. What do participants in this modelling activity learn about the process of cathedral building? The project’s suitability was initially questioned, but the LEGO Build became one of the most talked about fundraising projects Durham Cathedral has ever undertaken, capturing the imagination of many within the local community. By examining these aspects of modelling I consider the wider anthropological debates regarding the relations between models, narratives and the making of knowledge.